DID YOU KNOW THAT ?

Asymmetrical chewing caused by mixed food from a very young age (the food does not have time to be moved from left to right) favours asymmetrical muscle tone which leads to an oblique head posture. Once the head is tilted, the posture becomes overhanging and descending compensatory tensions can be triggered. 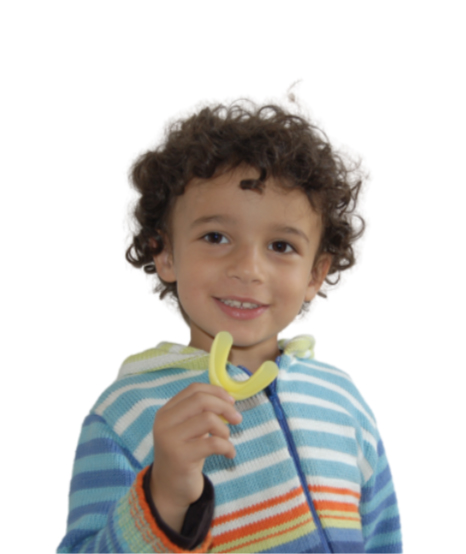 For children, we act on the teeth by strengthening the muscles in a balanced way thanks to the AOP (Active Oral Prosthesis) and the AOT (Active Oral Teat). The bone is malleable and the muscles pull the jawbone in order to separate the jaws. The tongue reinforcement pushes the palate to shape it and separate the upper jawbone. Milk teeth are smaller and fewer in number than permanent teeth, which is why it is important to strengthen the muscles in order to separate the jaws and to avoid orthodontic treatment (braces) during adolescence.

The AOT also has a passive orthodontic action on the teeth. It puts pressure on the teeth and acts as a guide with its double mouthpiece in physiological class 1. It is also important to know that a pressure of 1.6 g on a tooth during 8 weeks is enough to make it move 1 mm. In children, the bone is malleable and the orthodontic action is easier. For adults, the bone is tightly fixed. However, the alveolar bone is more porous over 1 mm around the tooth. In short, the tooth can move 1 mm by tensioning the mouthpiece.

La TBA est un substitut aux tétines classiques et au pouce en bouche. La tétine classique n’est pas gênante avant l’âge de 2 ans, elle est même bénéfique The AOT is a substitute for the classic teats and thumb in mouth, which favour a lower tongue and orthodontic deformity. The classic teat is not disturbing before the age of 2 years. It is even psychologically beneficial for the child since it is a memory of the bond with the mother (breast-feeding). From the age of 2 years, the milk teeth come out and it is at this age that the classic teat should be avoided, as it can promote a low tongue and dental deformities (by pushing the tongue). Substitution with the AOT becomes therefore easier and the sucking effect fades quickly.
AOT is a psychological comfort for the child (just like a cuddly toy). The classic teat should not be taken away abruptly when it is a great comfort to the child. The AOT is the best initiative.
The AOT can be used before the age of 2 years so that the child can teethe on it. It can chew on the branches to soothe the pain of teething. Thus, the AOT is accepted more easily and the child will be able to use it more easily as a teat as soon as he can put it in his mouth.

A hypotonicity of the tongue (low tongue) forces the child to take support on the teeth (instead of the palate). If the lips are also hypotonic, they do not play their role as a stabilising wall which straightens the teeth. The tongue pushes the teeth forward and the lips give way to the pressure. This is how the teeth move forward. With the AOT (placed upside down), the child can place the ball of the handle between the teeth and the lips. When manually pulling the AOT forward, the child must contract his lips to keep the tip of the AOT between the teeth and lips. The child can also pinch the handle with his lips to strengthen them.

A hypotonic tongue spreads out and can obstruct the posterior air crossroad while sleeping. The tongue will thus prevent air coming from the nose from passing into the lungs. To breathe, the child must then open his mouth. In advanced cases, the child's mouth is open during the day. He or she breathes only through the mouth.

The AOT and the AOP Junior thus act on the improvement of functions :

Actively with the tray (exercises): the child strengthens his tongue through the exercises. The tongue becomes more tonic and no longer blocks the posterior air crossroad.

Passively with the tray (without exercise): the tray takes up space and the tongue is forced to curl up so that it can take its place in a smaller space. It also has more difficulty swallowing saliva. So, it really has to work despite passive wearing of the tray. It is also important to know that at the initial stage of wearing, the brain believes that the tray is a kind of food. Hypersalivation is automatically triggered, which forces an overworking of the tongue. After a few minutes, the brain understands that the tray is not food and salivation stops.
Swallowing

Whether passive or active, hypersalivation requires the tongue to work in order to swallow (saliva). The tongue normally rests on the palate during swallowing. This counter-support is necessary so that the body of the tongue can create a ‘wave’ that pushes the saliva towards the throat. With the tray, the hypotonic (low) tongue can rest on its underside to make swallowing easier. The tongue can then follow the ‘lingual guide’ (= inclined slope) to reach the palate. The swallowing work can thus be done gradually.
Mastication

The maxillofacial muscles will be able to work symmetrically and alternately thanks to the active tray. Tedop mouth activators have an additional advantage compared to Kinepod AOPs: they allow for greater amplitude and better ‘diduction’ (lateralization of the jaw), as well as greater resistance.
Phonation

Trays can also be used to counter bruxism (central, lateralized) related to a state of stress.

CENTRAL BRUXISM = controlled, more aggressive tightening of the jaw, by absence of movement, resulting in strong pressure on the same point.

- Mechanical stress (crown, worn amalgam),
- Psychological stress (state of nervous tension),
- Postural stress (unstable feet, the body is out of balance and the teeth are clenched by tensing the whole body from the top for stabilisation).

At rest, the teeth do not touch. The jaw floats and there is therefore no joint stress. It is important to know that our teeth are only in real contact for 30 minutes a day. If a patient clenches the teeth during the day (by simple contact) and at night, the temporo-mandibular joints will be overloaded and will become inflamed. The jaw is 1 mm from the inner ear and 1 mm from the atlas. These 2 elements risk being disturbed by the inflammation that invades them (via the inflamed temporo-mandibular joints).

The trays act on snoring in 2 ways :

- Passively : a double tray stabilises the mouth in a physiological position. The jaw doesn't go down if you sleep on your back. So the tongue won't obstruct the posterior air crossroad.

- Actively : by strengthening the tongue, it takes up less space and no longer compresses the posterior crossroad.

Mouth activators are teeth-protectors and improve respiratory or cardiovascular performance.

Why does an athlete perform better by placing a tray in his mouth? If a patient has an inclined posture, e.g. as the Tower of Pisa, he has to expend more energy to maintain his balance in his unbalance. If the tray rebalances the head posture, the overall posture will readjust itself, which helps to save energy and make it easier to make an effort.

Head posture tilted to the right is caused  :
- either by a simple muscular problem: masticatory muscles that are too toned to the right favour a right tilt,
- or by a more consequent problem deforming the temporo-mandibular joint: a deviation of the jaw to the left favours a rotation of the head to the right (arc of a circle).

Causes of a deviated jaw :
- Trauma: boxing, slap on the jaw,
- Patient sleeping on his stomach (lateral pressure on the jaw),
- Asymmetrical overworking of the muscles which deforms the jaw at a given moment.
- Head posture in straight rotation: excessive tension of the muscles on the right. The cause is more often ocular. 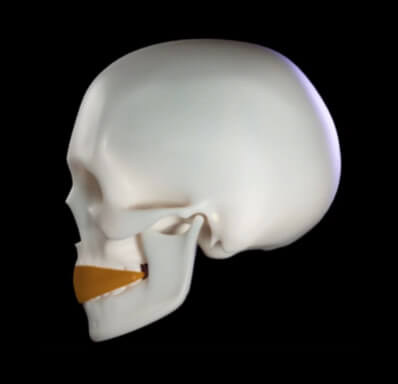 2 ranges: a customisable Kinepod range for ‘dental surgeons’ and a range for the general public.

Photo of an AOP dental range

ACTIONS
TECHNICALITY OF THE PRODUCTS 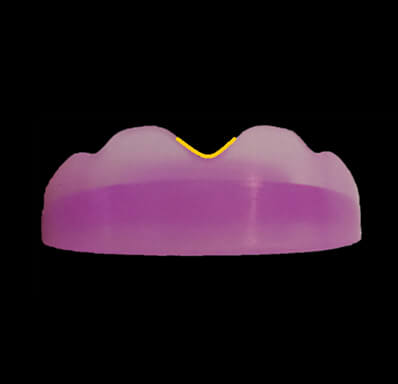 Silicemed = Bisphenol-free, phthalate-free, PVC-free medical silicone. Elastic and resistant silicone. The density of the silicone makes it possible to eliminate perceived dental irregularities (badly shaped fillings, badly positioned crowns or implants). The fact that the tray is made of a soft silicone therefore promotes perfect dental occlusion. This is a great advantage over rigid trays that cannot compensate for irregularities.

AGE AND SIZES FOR ALL TRAYS

AOT : from 2 to 5 years (if the posterior branches are too large, they can be cut back).
AOP Junior : from 5 to 14 years old. Suitable for adults who have an inter-canine space below 3 cm.
AOP, MA and MA+ : over 14 years. Also suitable for children who have a canine space of more than 3 cm.